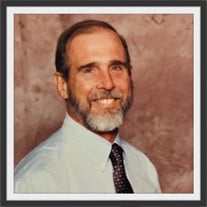 Dr. William C. "Bill" Tate II, age 73, of Linville, North Carolina passed away on Wednesday, May 27, 2020 at his residence with his family by his side. He was born on August 8, 1946 in Fort Campbell, Kentucky, a son of the late Dr. Lawson Tate and the late Margaret Thompson Tate. A graduate of the University of North Carolina’s medical school, Dr. Tate began practicing alongside his father Lawson in 1977, and on his own more than forty years of treating the people of Avery County, he devoted himself to providing more than medical care, as he worked to make Avery County a better place. He built upon the past and reached to the future, spearheading healthcare improvements in the region and helping to shape a twenty-first-century Avery County of which his grandfather’s (Dr. W.C. Tate) patients could only have dreamed. Whether playing with his grandchildren, making another memory with his wife Donna, serving as an Elder in the Banner Elk Presbyterian Church or singing in the choir, spending 20 years championing education as part of Avery County’s School Board, serving on the Board of Trustees for the Edgar Tufts Memorial Association, Lees-McRae College and the Grandfather Home for Children, being a Charter member and supporter of the YMCA, or just hugging someone in the grocery store, Dr. Tate’s devotion to his family, his faith, and his community shone through in all he did. He loved to work on puzzles, snow ski, ride his bicycle, watch various sporting events, especially Tar Heel Basketball "GO HEELS!", working in his flower gardens, pick the banjo and play the guitar. He found great solace in just sitting on his porch with Donna taking pictures while bird watching. Dr. Bill was a healer and a friend to everyone in Avery County. He will be truly missed and his memory will be cherished by all those who knew him. In addition to his parents, he was preceded in death by his Father In Law, Ed Smith. Dr. Tate leaves behind to cherish his memory his: Wife and love of his life, Donna Smith Tate of Linville, NC, Daughter, Melissa Tate Parker of Jacksonville, FL, Daughter, Angela Tate (Bill) Tuck of Banner Elk, NC, Step Daughter, Kari Joyce (Daniel) Brown of Boone, NC, Step Daughter, Ashley Joyce (Adam) Jones of Deep Gap, NC, Sister, Susan Tate (Lynn) Carter of Banner Elk, NC, Sister, Anne Tate (Russ) Bergman of Myrtle Beach, SC, Brother, Johnny Tate of Sugar Mountain, NC, Brother, David Lawson Tate of Banner Elk, NC, Brother, Bobby (Susie Daniels) Tate of Banner Elk, NC, Mother In Law, Barbara Smith of Valle Crucis, NC; grandchildren, Madison, Avery, Campbell, Alden, Daniel, Morgan, Brayden and Kaleigh; his Best Friend and Colleague, Dr. Tom (Lisa) Haizlip of Banner Elk, NC. Due to ongoing concerns over large crowds regarding Covid-19, a memorial service for Dr. William C. "Bill" Tate will be held during the month of October, which was his favorite time of the year in Avery County. Family and friends are welcome to visit at the Tate residence in Linville. The entire Tate family would like to thank the Doctors, Nurses, and staff of Cannon Memorial Hospital for their friendship and care, and to the staff of Caldwell Hospice and Palliative Care, words cannot begin to thank you enough for the loving care and support you provided during the past few months. In lieu of flowers, memorials may be made to: Appalachian Regional Healthcare Foundation-For Charles A Cannon Memorial Hospital, 336 Deerfield Rd., Boone, NC 28607. Words of Comfort and Memories may be shared with the Tate family by visiting our website www.rsfh.net The care of Dr. Bill and his family has been entrusted to Reins-Sturdivant Funeral Home of Newland. (828) 733-2121

Dr. William C. "Bill" Tate II, age 73, of Linville, North Carolina passed away on Wednesday, May 27, 2020 at his residence with his family by his side. He was born on August 8, 1946 in Fort Campbell, Kentucky, a son of the late Dr. Lawson Tate... View Obituary & Service Information

The family of Dr. William C. "Bill" Tate II MD created this Life Tributes page to make it easy to share your memories.