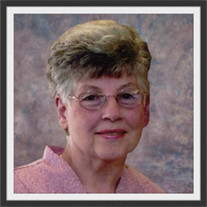 Willamae Johnson Sluder, age 89, of Newland, North Carolina passed away on Monday, May 24, 2021 at the Life Care Center of Banner Elk. She was born on July 17, 1931 in Avery County, North Carolina, a daughter of the late William Anderson Johnson and the late Aubry "Sis" Cornett Johnson. Willamae liked music, loved to sing around the house, canning and spending time in her flower garden. She was a member of the Vale Freewill Baptist Church and sang in the choir. She enjoyed watching TV, reading and her pets. In addition to her parents, she was preceded in death by her Son, Roger Sluder; Six Brothers, Ballard Johnson, Leonard Johnson, James Johnson, John Johnson, Emmett Johnson, Lonnie Johnson; Four Sisters, Thousa Trice, Myrtle Hodges, Juanita Hodges, Margaret Ledford. Willamae leaves behind to cherish her memory her husband, Ronald Sluder of the home; Daughter, Roxann Smith of Elizabethton, TN; daughter-in-law, Cindy Sluder of Roanoke, VA; grandchildren, Tim Palmer, Nikki (Christopher) Smith Carr, Michael (Kirsten) Smith, Chris Sluder, Matt Sluder; great grandchildren, Bryson Smith, Carter Hannah, Israel Smith and Ansley Grayce Carr. Services for Willamae Johnson Sluder will be held on Thursday, May 27, 2021 beginning at 7:00 pm from the Reins-Sturdivant Funeral Home with Rev. Michael Sluder officiating. The family will receive friends beginning at 5:00 pm on Thursday evening at Reins-Sturdivant Funeral Home. Family, friends, and pallbearers will gather at the funeral home on Friday, May 28 at 10:00 am to go in procession to the Ashley Cemetery for interment. Pallbearers will be: Christopher Carr, Tim Palmer, Michael Smith, Chris Sluder, Matt Sluder and Bryson Smith. The family would like to extend their heartfelt thanks to the wonderful and caring staff of Life Care Center of Banner Elk. In lieu of flowers, memorials may be made to the Alzheimer's Foundation or to St. Judes Children's Hospital. Words of Comfort and Memories may be shared with the Sluder family by visiting our website www.rsfh.net The care of Willamae and her family has been entrusted to Reins-Sturdivant Funeral Home of Newland. (828) 733-2121

Willamae Johnson Sluder, age 89, of Newland, North Carolina passed away on Monday, May 24, 2021 at the Life Care Center of Banner Elk. She was born on July 17, 1931 in Avery County, North Carolina, a daughter of the late William Anderson Johnson... View Obituary & Service Information

Send flowers to the Sluder family.