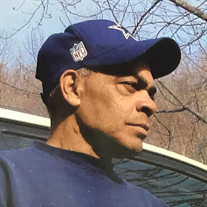 Roger G. Jackson, age 64, of Plumtree, North Carolina passed away on Tuesday, February 12, 2019 at Piney Grove Nursing & Rehab Facility in Kernersville, NC. He was born on May 27, 1954 in Banner Elk, North Carolina, a son of the late Johnnie Jackson and the late Magnolia Mathes Jackson. He was preceded in death by his Parents and his nephew Anthony Whittington. Roger attended Beech Bottom Mennonite Brethern Church. He enjoyed fishing, classic cars, any kind of racing, watching bonanza and Clint Eastwood movies. Roger was an avid fan of the Duke Blue Devils and the Dallas Cowboys. Roger was an excellent father and role model for his four sons. He taught his sons how to be strong and work hard but most importantly how to be a provider. He enjoyed listening to Motown, and the Temptations. Roger leaves behind to cherish his memory his: Son, Darrell Jackson of Morganton, NC, Son, Reggie Jackson of Cary, NC, Son, Brian (Ashley) Jackson of Winston Salem, NC, Son, Kellen Jackson of Morganton, NC, Grandchildren; Kellen Ty, Kylie, and Kolton Jackson of Morganton, NC, Brother, Steve Jackson of Forest City, NC, Sister, Charlene Phillips of Hendersonville, NC, Mother of Children, Patricia Molden of Morganton, NC, and a host of Uncles, Aunts and Cousins. Services for Roger Jackson will be held on Saturday, February 16, 2019 beginning at 2:00 pm from Beech Bottom Mennonite Brethern Church with Pastor Mike Mathes and Rev. Wallace Wise officiating. The family will receive friends beginning at 1:00 pm up until the service hour on Saturday at Beech Bottom Mennonite Brethern Church. Interment will follow in the Conley Chapel Cemetery. Pallbearers will be Tyree Jackson, Quinton Jackson, Chris Jackson, Shawn Trivette, Greg Hoilman, and Marvin Ervin The family would like to offer a special thank you to the staff at Wake Forest Baptist Medical Center and Mission Memorial Hospital for the care they provided Roger and his family. Also the family would like to thank all of the friends and family who have showed support through his sickness. Words of Comfort and Memories may be shared with the Jackson family by visiting our website www.rsfh.net The care of Roger and his family has been entrusted to Reins-Sturdivant Funeral Home of Newland. (828) 733-2121

Roger G. Jackson, age 64, of Plumtree, North Carolina passed away on Tuesday, February 12, 2019 at Piney Grove Nursing & Rehab Facility in Kernersville, NC. He was born on May 27, 1954 in Banner Elk, North Carolina, a son of the late Johnnie... View Obituary & Service Information

The family of Roger Gene Jackson created this Life Tributes page to make it easy to share your memories.

Send flowers to the Jackson family.