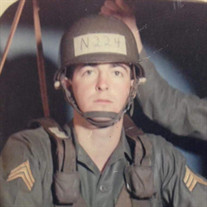 Robert Clay Wiseman, 71, of Newland passed into the eternal light and love of his Heavenly Father on October 25th 2018. Robert passed peacefully at his home surrounded by those he loved most. He dealt with this most challenging illness in his true form of courage and firm faith in God. To mourn his passing, he leaves his son Bill, future daughter-in-law, Bonnie Wilkinson, sister, Doris Boulton, niece, Caroline Fernandez, plus a host of friends and cousins. Robert was preceded in death by his first wife, Lilly, mother of his children, daughter, Bonnie, second wife, Donna, brother-in-law, Jerry Boulton, and his parents Helen and Clay Wiseman. Robert was baptized and grew under the auspices of Plumtree Presbyterian Church and the tutelage of Pastor T.W. Clapp. He remained a member until his death. Robert attended Avery Schools, Lees- McRae College, and East Tennessee State University where his studies were interrupted by a call to serve his country in Viet Nam. Robert served his country in Viet Nam as Ranger with the 173rd Airborne Division in some of the fiercest fighting in the jungles around Ben Hoa as leader of a seven-man Reconnaissance Team. He was the sole survivor. Far from being resentful, Robert remained active with the local Veterans of Foreign War with Post 4286. Returning to East Tennessee State after service to his country, he received his degree in Business Management. In 1973 he was hired by Avery County as Budget Director. This title was later changed to County Manager. After working with Avery County the first time, Mr. Wiseman went to Seven Devils as Town Manager. In 1980, he went to work as Director of Business Management at Black Mountain Center for Mental Disabilities and Substance Abuse. He was later promoted to director at the Junior Evaluation Center in Swannanoa. In 1999, he went to Spruce Pine as Town Manager for five years, then as Mitchell County Manager for five years. In all, Mr. Wiseman had over twenty-five years of experience in state, county and municipal government and public service. In 2002, he returned home to Avery County as County Manager. His heart was always with the people and government of his home county. He truly loved each he served. Throughout his years of service Robert gained and continued to possess an intimate knowledge of the socio-economic demographics of Avery County, as well as the educational and geographical make-up. Robert has proven himself a true hero not only to his country, but to his community and family alike. Robert’s family would like to thank the Staff of Medi Home Hospice, with special thanks to Lareeca, Cindy, Jessica, Brinkley, Diane, Mary and Hannah. Funeral services for Robert C. Wiseman will be held at 2:00 p.m. on Sunday, November 4, 2018 at the Crossnore First Baptist Church with the Rev. Wallace Wise and Rev. Mathew Jacobs officiating. The family will receive friends on Saturday, November 3, 2018 from 4:30 – 8:30 pm at Reins-Sturdivant Funeral Home 296 Ash Street Newland, NC 28657. The family respectfully requests that in lieu of flowers, memorials be made to the VFW Children’s Christmas Fund, c/o Pat Ray Post 4286 PO Box 516 Newland, NC 28657 or to Medi Home Hospice PO Box 1357, Newland, NC 28657. Condolences and memories may be shared with the family at www.rsfh.net The care of Robert and his family has been entrusted to Reins-Sturdivant Funeral Home of Newland.

Robert Clay Wiseman, 71, of Newland passed into the eternal light and love of his Heavenly Father on October 25th 2018. Robert passed peacefully at his home surrounded by those he loved most. He dealt with this most challenging illness in his... View Obituary & Service Information

The family of Robert C. Wiseman created this Life Tributes page to make it easy to share your memories.

Robert Clay Wiseman, 71, of Newland passed into the eternal light...

Send flowers to the Wiseman family.