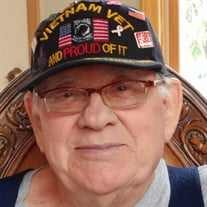 Robert John Anderson, age 85, of Newland, North Carolina passed away on Saturday, November 17, 2018 at the Mountain Home VA Medical Center. He was born on March 22, 1933 in Bismarck, North Dakota, a son of Clair Anderson and Nellie Grey Anderson. Bob proudly served his country in the United States Air Force during the Vietnam War. He served during the Tet Offensive and received 2 Bronze Stars. Following his service in Vietnam he was assigned as an Administrator at the United States Pentagon with rank of Master Sergeant. He had Top Secret Clearance while fulfilling his assignments at the Pentagon. He retired from the Air Force after 26 years of service. He attended the Salvation Army Church and enjoyed fishing, movies, hunting, snorkeling, collecting shells and Small engine repair. His grandchildren were the apple of his eye, and he would spend as much time as possible with them. Bob was known for his honor, integrity, honesty, unconditional love of family and friends. He was preceded in death by his Father, Clair Anderson; Mother, Nellie Anna Anderson; Brother, Mickey Anderson; and the mother of his children, Betty Anderson. Bob leaves behind to cherish his memory his: Daughter, Pinky (Roger) Anderson-Dennett of Newland, NC, Daughter, Brenda (Harold) Rants of Bismarck, ND, Daughter, Debra Johnson of Honea Path, SC, Daughter, Karla (John) Shuler of Winston-Salem, NC, Son, Clifford "Tiger" (Rachael) Anderson, Brother, Danny (Barbara) Anderson of Phoenix, AZ, Sister, Lucretia Schuler of Prescott, AZ, Sister, Alalie (Patrick) Monaghan of Seattle, WA; Twelve grandchildren, and many great grandchildren. Services for Robert John Anderson will be held at 6:00 p.m. on Tuesday, November 27, 2018 at the Sugar Mountain Baptist Church with the Rev. Rick Hines officiating. A meal will follow the service at the church. Interment with Full Military Honors will be on Wednesday, November 28, 2018 at 10:45 am in the Mountain Home National Cemetery. Family, friends, and pallbearers are to gather at the cemetery line up area between 10:15 and 10:30 am on Wednesday morning. In lieu of flowers, memorials may be made to: The Mountain Home VA Medical Center Hospice. Words of Comfort and Memories may be shared with the Anderson family by visiting our website www.rsfh.net The care of Bob and his family has been entrusted to Reins-Sturdivant Funeral Home of Newland. (828) 733-2121

The family of Robert "Bob" John Anderson created this Life Tributes page to make it easy to share your memories.

Send flowers to the Anderson family.