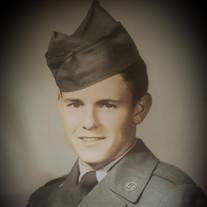 Rhonda (Ron) Lee Turbyfill, age 85, of Elk Park, North Carolina passed away on Wednesday, March 20, 2019 at the Charles A. Cannon Memorial Hospital in Linville, NC. He was born on October 8, 1933 in Greene County, Tennessee, a son of the late Julius Edward Turbyfill and the late Ada Ward Turbyfill. Ron served his country during the Korean War in the US Air Force. Upon returning home he went to work for the James Quillen VA Medical Center as a Fire Inspector and remained there until his retirement. He volunteered with the Johnson City Fire Department and enjoyed woodworking, fishing, and riding his Harley. Ron was a Mason and attended the Blue Ridge Mountain Church. In addition to his parents, he was preceded in death by his Son, Bobby Edward Turbyfill; Five Sisters, Helen Johnson, Hilma Watson, Audrey Hamilton, Geraldine Ward, Wanda Phillips; Brother, Ray Turbyfill. Ron leaves behind to cherish his memory his: Wife, Bonnie Turbyfill of Elk Park, NC, Granddaughter, Kelley (Justin) Quillen of Johnson City, TN, Granddaughter, April (Rob) Banks of Kingsport, TN, Sister, Wilma Lucille Ellis of Elk Park, NC, Brother, John (Gloria) Turbyfill of Huntersville, NC, Great Grandchildren, Abby and Amaari. Funeral services for Ron Turbyfill will be held on Monday, March 25, 2019 at 11:30 am in the Grandfather Chapel of the Reins-Sturdivant Funeral Home. The family will receive friends from 10:30 until the service hour Monday at the funeral home. Interment will follow with Military Honors in the Mountain Home National Cemetery. The family would like to extend a very special thank you to the Nurses and Staff of Medi Home Hospice and request in lieu of flowers that memorials be made in Ron's memory to Medi Home Hospice PO Box 1357 Newland, NC 28657. Words of Comfort and Memories may be shared with the Turbyfill family by visiting our website www.rsfh.net The care of Ron and his family has been entrusted to Reins-Sturdivant Funeral Home of Newland. (828) 733-2121

Rhonda (Ron) Lee Turbyfill, age 85, of Elk Park, North Carolina passed away on Wednesday, March 20, 2019 at the Charles A. Cannon Memorial Hospital in Linville, NC. He was born on October 8, 1933 in Greene County, Tennessee, a son of the late... View Obituary & Service Information

The family of Rhonda (Ron) Turbyfill created this Life Tributes page to make it easy to share your memories.

Send flowers to the Turbyfill family.