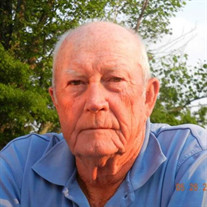 Ralph Stedman "Ted" Hughes, 82, of Tega Cay, SC, passed away on Tuesday,January 21, 2020 at the Carolina Medical Center in Charlotte, NC. He was born on July 15, 1937 in Avery County to the late Columbus Henry and Bertha Boone Hughes. In addition to his parents he was preceded in death by his first wife, Shelby Jean Hughes; one son, Mark Henry Hughes; two brothers, Dwight David Hughes and James Frank Hughes; and two sisters, Graces Daniels and Marian Garland. Ted was a United States Army Veteran and served in the Korean War. After leaving the Army he worked as an Assistant Golf Professional at Mimosa Hills in Morganton, North Carolina and then went on to become the Assistant Greens Superintendent at the Grandfather Golf Country Club before becoming the Greens Superintendent in Tega Cay, South Carolina for over 20 years. He later went on to work in the recycling industry. Ted attended Bible Baptist in Fort Mill, SC. He was well known as the "Old Golf Pro" AKA "THE GOAT". Ted was a loving father and grandfather. He enjoyed spending time with his family making wonderful memories that they will cherish. He also enjoyed making good liquor and playing golf at Tega Cay Golf Club. Ralph is survived by his loving spouse, Joan Tappmeyer Leadbetter Hughes; one son, JD Hughes; three sisters, Helen Hughes of Linville, Christine Billings of Rural Hall, and Shirley Gelston of Denver, CO; one brother, Paul Hughes and wife Fay of Linville, NC; two grandsons, James Avery Hughes of Plum Tree and Henry Grant Hughes of Chapel Hill; one step daughter; Kimberly Waldo and husband Wes of Lancaster, SC; and four step grandchildren, Logan Waldo of Columbia, SC., Abigal Denkins and husband McKenzie of Travelers Rest, SC., Lindsey Waldo and Megan Waldo both of Lancaster, SC. Funeral services will be held Tuesday, January 28, 2020 at 3:00 P.M. at Reins-Sturdivant Funeral Home with Rev. James Heaton officiating. Military honors will be provided by the Newland VFW Ray Pat Post #4286. The family will receive friends from 1:00 to 3:00 P.M. prior to the service at the funeral home. Interment will follow immediately after the service at Tanglewood Cemetery. The family would also like to extend an invite to everyone to join them at the Old Hampton Store immediately following the interment. In lieu of flowers, the family respectfully requests the memorial donations be made to The Skin Cancer Foundation, 205 Lexington Ave, 11th Floor, New York, New York 10016 Words of Comfort and Memories may be shared with the Hughes family by visiting our website www.rsfh.net The care of Ralph and his family has been entrusted to Reins-Sturdivant Funeral Home of Newland. (828) 733-2121

Ralph Stedman "Ted" Hughes, 82, of Tega Cay, SC, passed away on Tuesday,January 21, 2020 at the Carolina Medical Center in Charlotte, NC. He was born on July 15, 1937 in Avery County to the late Columbus Henry and Bertha Boone Hughes. In addition... View Obituary & Service Information

The family of Ralph Stedman "Ted" Hughes created this Life Tributes page to make it easy to share your memories.