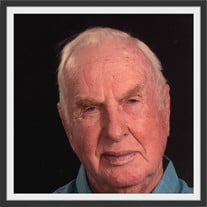 Ralph Atlas Baird, age 89, joined his beloved “Betsy” in their heavenly home on March 24, 2020. He passed peacefully at home surrounded by his family. Ralph was born on June 1, 1930 to the late Charles (Charlie) Bosler Baird and Virginia (Virgie) Banner Baird. In addition to his parents, he was also preceded in death by two brothers, Charles (Bill) Baird & Johnny Baird. Two siblings left to share his memories are Jean (Boyte) Lutz of Shelby, NC and Guy (Ingrid) Baird of Pittsboro, NC. Ralph married the love of his life, Betty Jean Daniels on April 7, 1951. He was a devoted & loving husband, as well as, father to his four children; Peggy Baird of Newland, Jim (Vickie) Baird of Fall Branch, TN; Ben (Bev) Baird of Newland and Patricia (Norm) Potter of Lewisville, NC. Ralph served in the US Air force for two years beginning in 1950. Upon discharge from service he began his 33 year career with the Newland Post Office, serving as a rural mail carrier. In addition to his postal work, he & Betty worked together both as parents and as caretakers of the Baird farm. In 1978 Ralph & son, Ben established B &R Nursery where they worked together for many years growing and harvesting Christmas trees. In 2003, Ralph & Ben Baird families were recognized by NC Farm Bureau as the Farm Family of Year. Ralph was an active member of Avery County Lions Club serving in various capacities for many years including District Governor of District 31-B. In 1973 he was chosen by the Avery Chamber of Commerce as Avery County’s Man of the Year. Ralph served as a member of the Avery County Board of Education for several years. He grew up in the Newland Presbyterian Church where he served as an Elder, Sunday School Teacher, & Choir Member for many years. He was a deeply devoted Christian whose life was dedicated to serving others. One of Ralph’s greatest talents was his incredible tenor voice often heard in local choirs, at special events and even while delivering mail or working on the family farm. You could never go to Ralph & Betty’s home without leaving with more than you came, whether it was vegetables from his bountiful garden, fruit from an assortment of trees grown in the backyard or a bouquet of beautiful flowers from his flower garden. Ralph’s legacy will live on for years through his beloved fourteen grandchildren, Daniel Baird, Sarah (Jeremy) Shipp, David (Tiffany) Baird, Katherine (Joe) Johnson, Jeremiah Baird, Hannah (Shae) Judge, Isaac (Cameron) Baird, Rebekah Baird, Whitney (Blake) Vance, Nicole (Derek) South, Seth (Casey) Baird, Meredith Potter, James Potter, and Stephen (Kasey) Potter; eight great grandchildren, Elizabeth, James, Verity, and Grace Shipp, Lucy Johnson, Elijah Judge, Atlas and Selah J South, Wilder Betsy Baird; and one expectant great grandchild. The family is so thankful for the wonderful care provided by Barbara Shell and the nursing staff from Blue Ridge Hospice. A memorial service will be planned and held at a later date in the future. Memorial donations can be made in honor of Ralph to Newland Presbyterian Church, P.O. Box 579, Newland, NC 28657. Words of Comfort and Memories may be shared with the Baird family by visiting our website www.rsfh.net The care of Ralph and his family has been entrusted to Reins-Sturdivant Funeral Home of Newland. (828) 733-2121

The family of Ralph Atlas Baird created this Life Tributes page to make it easy to share your memories.

Ralph Atlas Baird, age 89, joined his beloved “Betsy” in their...

Send flowers to the Baird family.