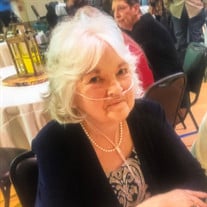 Opal Jolean Eggers, 72, of Morganton, went to her heavenly home on Thursday, July 1, 2021 surrounded by her loving family at her residence in Morganton. She was born on September 18, 1948 in Avery County to the late Eugene and Louise Hodges Rupard . In addition to her parents, she was preceded in death by two sisters, Billie June and Maxine. Opal or "Jo" as people referred to her affectionately, was a devoted mother, wife, daughter, sister and friend. Jo was an amazing mama who put her children above all else in the world. She would go outside and throw football with her kids. Jo never had any actual football throwing lessons so she would hold the ball with this crazy looking two handed side arm sling that became quite accurate over time. Anything for her children was possible. One of the greatest joys in Jo's life was the family dinners once each month. This tradition had been started by her mother to make sure her kids stayed in touch after she was gone. Jo was an amazing talent in the kitchen but mainly focused on dessert such as, red velvet cake, carrot cake, apple cake and butterscotch dessert. You name it and she could prepare it masterfully. Jo will always be remembered for her gentle nature, sense of humor, stubbornness, and a loving heart. Jolean is survived by her Daughter, Lori Eggers of Morganton; Sons, Michael Eggers of Wilkes and Matthew Eggers of Hickory; Grandchildren; Justin Eggers, Nathan (Haley) Eggers, Steven Eggers, Amelia Eggers, Walker Eggers; Sisters, Barbara, Molly, Penny, Martha, Kim, Christine, and Sandra; Brothers, Jay, CW, and Freddie; Aunts, Margaret Townsend and Wanda Hodges; and numerous nieces, nephews and cousins. Funeral services will be held on Monday, July 5, 2021 at White Rock Baptist Church in Banner Elk, North Carolina with Rev. Lynn Shook officiating. The family will receive friends from 1:00 to 2:00 PM prior to the service at the church. Interment will take place following the service at White Rock Cemetery. In lieu of flowers, memorial donations may be made to the hospice of your choosing to help support the special care they give each and everyday for those most in need. Online condolences for Jo may be given at www.rsfh.net. The care of Jo and her family has been entrusted to Reins-Sturdivant Funeral Home of Newland.

Opal Jolean Eggers, 72, of Morganton, went to her heavenly home on Thursday, July 1, 2021 surrounded by her loving family at her residence in Morganton. She was born on September 18, 1948 in Avery County to the late Eugene and Louise Hodges... View Obituary & Service Information

The family of Opal Jolean Eggers created this Life Tributes page to make it easy to share your memories.

Opal Jolean Eggers, 72, of Morganton, went to her heavenly home...

Send flowers to the Eggers family.