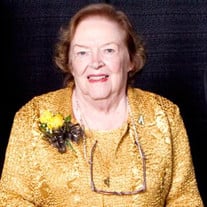 Martha Guy of Newland, North Carolina, died Saturday, October 12 at the age of 97 at her home. She was born to the late Edwin C. and the late Mary Bruce Landis Guy on August 20, 1922 in Newland. Except for her time away at school, she lived her entire life in Newland. She was a tireless advocate for western North Carolina and was inducted into the Order of the Long Leaf Pine Society by Governor Roy Cooper in 2017 as a testament to that work. She will be remembered for her love of North Carolina, her strong faith, her achievements in banking, her decades of community service, and her dedication to her family and friends. She attended Newland High School until 1936 when she was enrolled at Montreat College High School. Upon graduation from Montreat, she was enrolled at Lees-McRae College and graduated in June 1940 with an associate degree. For her final years of college, she attended the University of North Carolina at Chapel Hill and graduated with a bachelor’s degree in Chemistry in 1942. She was employed by Avery County Bank for more than 60 years, from 1942 until she retired in 2003. Her banking career began when her father, the bank’s founder, asked her to return from Chapel Hill to help him while her brothers were overseas during WWII. During her long tenure, she held many positions, ranging from Assistant Cashier to President. She also served on the Avery County Bank Board of Directors for many years. Throughout her career, she served on many state and national banking organizations, including as Treasurer of the Independent Bankers of America. She was inducted into the North Carolina Banking Hall of Fame in 2010 and was honored by the North Carolina Bankers Association with its Legends of Banking Award. Throughout her life, she dedicated much of her time to community service, including the advancement of higher education and health care in Western North Carolina. She served on the Board of Crossnore School beginning in 1956, serving as the Chairman for part of this time. She served as the Chairman of the Board for the Avery County Board of Education and as Chairman of the Board of Sloop Hospital. She also served on the boards of Cannon Hospital and the Williams YMCA of Avery County. She served as a trustee of the Morrison Charitable Trust since 1968. She was named a “Legend of Avery County” by the YMCA in 2012 and was honored with the Pinnacle Society Lifetime Achievement Award by the Appalachian Regional Healthcare Foundation in 2014 for her years of contributions to healthcare in Western North Carolina. In the area of higher education, she served on the Board of Visitors at UNC-CH, as a founding trustee at Mayland Community College, and on the Boards of Directors and Visitors at Mars Hill College, the Warren Wilson College, Lees-McRae College, Montreat College and Appalachian State University. She received honorary degrees from both ASU (Doctor of Laws) and Montreat (Doctor of Human Letters) and was an Emeritus Trustee of Lees-McRae College. She founded the Martha Guy Summer Institute for Future Business Leaders at ASU in 2004 and was honored with the naming of the Martha Guy Laboratories at UNCH-CH in 2004. She was a member of Newland Presbyterian Church throughout her lifetime. She was a Sunday School teacher for more than thirty years and served as an elder for several years as well. She served as moderator for the Presbytery of Western North Carolina and as a member of the Presbyterian Church Investment and Loan Program in Louisville, KY. In addition to all of her business and community accomplishments, she will be remembered for her intelligence, generosity, loyalty, love of travelling, and enjoying the company of friends and family. She will be terribly missed by her family, none of whom know a world in which she was not in it. She is survived by one sister, Dorothy G. Potter of Newland, eleven nieces and nephews, Mrs. Anne P. Love (Wayne) of Cary, NC, Mrs. Margaret G. Brooks (Fred) of Raleigh, NC, Ms. Martha Guy of Raleigh, NC, Mrs. Mary Bruce McKenzie Serene (Jim) of State College, PA, Dr. Burt McKenzie (Nancy) of Chapel Hill, NC, Mrs. Lissa McKenzie Peterkin (William) of Ft. Motte, SC, Mrs. Jane McKenzie Cartner (Jim) of Statesville, NC, Ms. Elizabeth McKenzie Warlick (William) of Mebane, NC, Mr. Norman Potter, Jr. (Patricia) of Winston-Salem, NC, Mr. Mark Potter (Kathy) of Tampa, FL, and Mrs. Elizabeth Potter Schuster (Joe) of Cumming, GA, twenty-two great nieces and nephews, and 15 great-great nieces and nephews, as well as hundreds of friends and colleagues. A celebration of Ms. Guy’s life will be held Tuesday, October 15th at 2:00 pm at Newland Presbyterian Church in Newland. Following the service, the family will receive friends in the church fellowship hall. In lieu of flowers, the family requests that donations be made in Ms. Guy’s honor to Newland Presbyterian Church P.O. Box 579 Newland, NC 28657. Words of Comfort and Memories may be shared with the Guy family by visiting our website www.rsfh.net The care of Martha and her family has been entrusted to Reins-Sturdivant Funeral Home of Newland. (828) 733-2121

Martha Guy of Newland, North Carolina, died Saturday, October 12 at the age of 97 at her home. She was born to the late Edwin C. and the late Mary Bruce Landis Guy on August 20, 1922 in Newland. Except for her time away at school, she lived... View Obituary & Service Information

The family of Martha Guy created this Life Tributes page to make it easy to share your memories.

Send flowers to the Guy family.