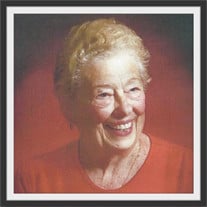 Louise Billo Shissler "Miss Spuz" of Newland, North Carolina, and formerly of Ringoes, NJ and Willow Grove, PA went home to be with her Lord on December 3, 2020. She was born October 30, 1931 in Scarsdale, New York to Geoffroy Billo and Rebecca Louise Benson Billo. She was a 1949 graduate of The George School in Newtown, PA and also attended Wheaton College in Norton, MA. She married Wallace E. ("Mick") Shissler III in March 1954. In 1962 Spuz and her husband Mick, along with several neighborhood parents, founded Cub Scout Pack 577. Spuz became a den mother and national Boy Scout instructor for five years. From 1959 to 1976 she was a program planner and swimming instructor at Sunny Willow Swim Club and Upper Dublin High School. During that time she also served as an AAU swimming official and diving judge. Spuz had a lifelong love of crafts. Her laundry room became a craft workshop where she created decoupage purses, plaques, macrame plant hangers, and decorative items for friends and neighbors. When a new craft came out, she tried it. Her love of crafting led her to open one of the first arts and crafts supply stores in the Dresher, PA area, By Spuz Crafts. She operated the store and taught crafts classes to many. During this time she attained several national teacher accreditations. Later she focused her attention on another passion, needle crafting, and was a member of the Bucks County Embroiderer's Guild of America. Many of her needlepoint and embroidery creations won awards at local and regional competitions and exhibitions. She also loved drawing and painting, nature photography, growing spectacular irises and lilies, and bird watching. She loved the NC mountains, especially the Linville Falls area and Wiseman's View. Left to cherish her memory are her sister, Gene Billo Haddon (Jim Metzger) of Chevy Chase, MD; two sons, Wallace E. (Mike) Shissler IV and wife Helen (Fowler) of Willow Grove, PA, and William John (Bill) Shissler, and wife Julie (Lamb) of Pineola, NC; three granddaughters, Jessica Louise Shissler of Langhorne, PA, Rebecca Christine Shissler of Tabor City, NC, and Danielle Christine Shissler of Levittown, PA; and one great-grandson, Andrew Patrick Bangs of Levittown, PA. Her family would like to express a special thank you to her caregivers at Heritage of Sugar Mountain, and to the ministering angels of Caldwell Hospice. Your kindness and caring will not be forgotten. Per Spuz's wishes, there will be no services; her family will gather at a later date for remembrance and celebration of her life. In lieu of flowers, memorial donations may be made to the Avery County Senior Center or to Linville Falls Community Church. The care of Louise and her family has been entrusted to Reins-Sturdivant Funeral Home of Newland.

Louise Billo Shissler "Miss Spuz" of Newland, North Carolina, and formerly of Ringoes, NJ and Willow Grove, PA went home to be with her Lord on December 3, 2020. She was born October 30, 1931 in Scarsdale, New York to Geoffroy Billo and Rebecca... View Obituary & Service Information

The family of Louise Billo Shissler created this Life Tributes page to make it easy to share your memories.

Send flowers to the Shissler family.