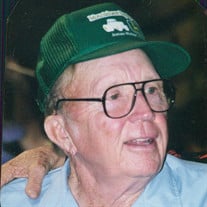 James Frank Hughes, Sr., age 94, of Linville, North Carolina passed away on Thursday, July 18, 2019 at his home with his family present. He was born on June 20, 1925 in Linville, North Carolina, a son of the late C. H. Hughes and the late Bertha Boone Hughes. He was a United States Army Veteran of World War II having served in Europe. C.H. Hughes and his sons, Dave and Jim, started the Linville Lumber Co. in 1945 and built the Pixie Motel of which Jim and Marietta became the sole owners of in 1962. A lifelong Republican, Jim had served as a Representative and a Senator in the North Carolina General Assembly and as the Linville Precinct Chairman for over 60 years. He established and was the President of the non-profit, Florence Boyd Home. He was proud of the Summer camps the Florence Boyd Home ran for underprivileged children and the help given to those in need through the non-profit.He was a charter member of the Pineola Moose Lodge, served as a Certified Emergency Medical Technician, he was a member of the Linville Lodge #489 and a Shriner. In addition to his parents, he was preceded in death by: Brother, Dave Hughes; Two Sisters, Grace Daniels, Marian Garland; Grandson, David Lee Hughes; . Jim leaves behind to cherish his memory his: Wife of 72 years, Marietta Pittman Hughes of Linville, NC; Daughter, Kaye Hughes of Linville, NC, Daughter, Sharon "Shad" Peters of Linville, NC, Son, James F. Hughes, Jr. of Linville, NC, Sister, Helen Hughes of Linville, NC, Sister, Christine Billings of Rural Hall, NC, Sister, Shirley Gelston of Denver, CO, Brother, Paul Hughes of Linville, NC, Brother, Ralph "Ted" Hughes of Fort Mill, SC; grandchildren, Sanford Hughes Greene, Hannah Greene, Lindsey Peters, Charlie Peters, Lauren Cox, James F. "Trey" Hughes, III; great grandchildren, Ayla Greene, Gavin Peters, Finch Coffman, Michael Peters and Levi Kissell. The family will receive friends beginning at 2:30 pm on Monday at Reins-Sturdivant Funeral Home with a service to Celebrate his Life to begin at 4:00 p.m. in the Grandfather Chapel with Rev. Lonnie Barnes and Rev. Donald Gragg officiating. Masonic Rites will be offered following the service in the chapel. Interment will follow in the Tanglewood Cemetery, with military honors to be provided by the Pat Ray Post of the VFW. The family would like to thank the Nurses and Staff of Medi Home Hospice for the loving care they have shown to Jim and Buddy, also to Hannah Greene and Shirley Gelston for the support and assistance during this time. In lieu of flowers, the family respectfully requests be made to the Florence Boyd Home PO Box 277 Linville, NC 28646; The Shriner's Childrens Hospital; or the Pat Ray Post of the VFW. Words of Comfort and Memories may be shared with the Hughes family by visiting our website www.rsfh.net The care of Jim and his family has been entrusted to Reins-Sturdivant Funeral Home of Newland. (828) 733-2121

The family of Jim Hughes Sr. created this Life Tributes page to make it easy to share your memories.