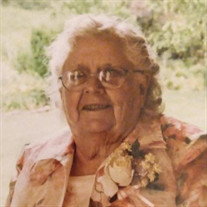 Jessie L Schroeder, of 1263 Little Elk Road, Elk Park, NC, was born, July 21, 1927, in the small town of Lavalle, Wisconsin to Fred and Jessie Costerisan. She was born 6th in a family of 8 children. She has outlived them all. Only one brother surpassed her in age. He was 98. She married Harold Otto Schroeder, October 29, 1944 in a quaint church in Ironton, Wisconsin at the age of 17. She met Harold when she was 13 at campmeeting in Wisconsin. Harold would park his car near the water fountain. As Jessie's mother would say later, Jessie nearly drowned herself that year going to the drinking fountain for a drink so often. Jessie told her mom she had met the man she was going to marry. Four years later she did marry Harold. Together, Harold and Jessie Schroeder were truck farmers for 57 years in the township of Oakland, Wisconsin until Harold's death in 2003 at which time her daughter took her to NC where Jessie had a little home of her own that she loved, nestled in the mountains of Western NC. Jessie gave up her dream of being a teacher to raise 4 children. She had another 2 children who died in infancy. I would say the she was a very good teacher as she raised her children to love the Lord. And she continued to teach through her stories she told every Sabbath in her little church in the mountains and even when she visited her former church in Wisconsin. She was a member of the Roan Mountain Seventh-day Adventist Church in Roan Mountain, TN. She will be buried in the cemetery at the Oakland Seventh-day Church in Wisconsin beside her husband, Harold, and near her baby boy, Richard. Together, they will rest till Jesus wakes them in the resurrection. Left to treasure her memories are 3 sons, Roger (Elaine) Schroeder, Ronald (Annette) Schroeder, and Harold Schroeder, better known as Harry, all from Wisconsin, 1 daughter, Joanne (Bruce) White from Elk Park, NC, 10 grandchildren, and 26 great grandchildren. One of Jessie's fond memories that she has mentioned to several people very recently was when she made pancakes one day for her grandkids when they came over to visit at meal time. They were having a contest to see who could eat the most pancakes. She couldn't remember who won, but, all she knew was she had to make an awful lot of pancakes. Mother loved the Lord with all her heart and passed away with the blessed hope that when the Lord returns she will be raised up to spend eternity with Jesus. Condolences and memories may be shared with the family at www.rsfh.net The care of Jessie and her family has been entrusted to Reins-Sturdivant Funeral Home in Newland.

Jessie L Schroeder, of 1263 Little Elk Road, Elk Park, NC, was born, July 21, 1927, in the small town of Lavalle, Wisconsin to Fred and Jessie Costerisan. She was born 6th in a family of 8 children. She has outlived them all. Only one brother... View Obituary & Service Information

The family of Jessie L Schroeder created this Life Tributes page to make it easy to share your memories.

Send flowers to the Schroeder family.