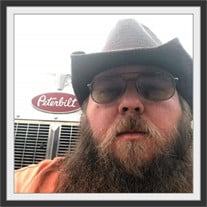 Jesse Lee Crowder, age 48, of Jonas Ridge, North Carolina passed away on Tuesday, October 26, 2021 at Watauga Medical Center. Jesse was born on October 25, 1973 in Crossnore, NC son of Danny & Norma Crowder. He graduated from Avery High School and worked for Avery County Solid Waste. He loved Alabama Football and UNC Tar heels. He also loved his dogs especially Daisy! He was a true Republican to the very end. Left to cherish his memory is his wife, Christy Crowder of the home. His son's, Justin Crowder of Dysartsville, Andy (Amanda) Hughes of Jonas Ridge, Tristan (Abi) Williams of Newland. Daughter, Ashley (Ben) Barber of Newland. His parents, Danny & Norma Crowder of Pineola. Mother & Father-in-law Diane (Richard) Hughes of Spruce Pine. His sister Melissa (Donald) Roberts of Old Fort. His Brother Skyelar Crowder of Pineola. Nephew's, Adam (Melissa) Warren of Pineola, Kyle (Destiny) Warren of Jonas Ridge. His niece, Makayla (Cody) McKinney of Pineola. Uncle Tony (Lisa) Crowder of Ingalls, Aunt Pam (Andy) Stephens of Hickory, Aunt Naomi (Donald) Gragg of Jonas Ridge, Ronald Jr (Diane) Clark of Jonas Ridge, Great nephew Isaiah McKinney of Pineola. And a whole host of cousins who were much more like brothers and sisters than cousins. Jesse is proceeded in death by his Uncle's Tim & Donnie Clark, Aunt Deborah Snyder, His grandparents Ronald & Betty Clark and Evelyn Carpenter, and his great nephew Marcus McKinney. Services for Jesse will be held Saturday, October 3Oth at Emmanuel Baptist Church in Newland, NC with receiving of friends from 12 pm to 2 pm service to begin at 2:00 pm. Services will be conducted by Reverend Joe Ingham. Followed immediately by grave side service at White's Memorial Baptist Church Cemetery in Ingalls, NC. The family would like to extend their sincere thanks and appreciation to the nurses and staff at Watauga Medical Center and to the many friends and community members who have been remembering Jesse and his family in their prayers the past few weeks. Words of Comfort and Memories may be shared with the Crowder family by visiting our website www.rsfh.net The care of Jesse and his family has been entrusted to Reins-Sturdivant Funeral Home of Newland. (828) 733-2121

The family of Jesse Lee Crowder created this Life Tributes page to make it easy to share your memories.

Send flowers to the Crowder family.