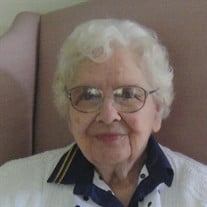 Jannie Roberta Pritchard Carter, aged 97, passed from this life and into the arms of her Savior on Friday, August 13, 2021. Jannie is survived by sons, Lynn Carter (Susan) of Banner Elk, and Joel Carter (Kim) of Belmont, NC; grandchildren, Grant Carter (Beth) of Boise, ID, Ryan Carter of Minneapolis, Nicole Carter Arnold (Steve) of High Point, NC; three great-grandchildren, Clarice, Alex, and Nate Arnold of High Point; brothers, Jack Pritchard of York, Pennsylvania, and Joe Pritchard of Leesburg, Florida; and two sisters-in-law and special friends, Christine Miller and Cleo Bertini. Jannie was preceded in death by her husband of 37 years, Alvin; her mother, Roberta, and father, Joel Pritchard; her brothers Maynard, Claude, Edward, Evain, and Jessie, and her sister, Daley Pritchard; and her daughter-in-law Margie Ollis Carter. She was born one of nine children to Joel and Roberta Pritchard of Minneapolis, NC, on May 30, 1924. After the death of her mother, Jannie was the only surviving daughter and took tender care of her brothers and father. She was known for her excellent cooking, her hospitality, and her servant’s heart. She graduated from Cranberry High School in 1941, where she served on the journalism team for the school newspaper. She met her husband, Alvin Marcus Carter, while he was visiting his aunt Lucille Lewis in Minneapolis. Jannie and Alvin married in 1943, and the joy of her heart was raising her two sons, Lynn and Joel. In addition to being a loving mother and dedicated homemaker, Jannie worked at the Newland Knitting Mill and at Baxter, Inc., in North Cove, NC, for 30 years. She was a lifelong member of Minneapolis Baptist Church where she sang alto in the choir. Although she lost her only sister at a young age, she was blessed in marriage with six adoring sisters-in-law who doted on her and were her steadfast friends. She will be remembered for her unwavering devotion to the Lord, her meek and gentle spirit, her active prayer life, and her singing and humming of hymns while working happily in her home. Funeral services will be held at 2 pm on Thursday, August 19, at Minneapolis Baptist Church with Pastor Clifford Phillips officiating. The family will receive visitors from noon to 2 pm before the funeral service. A graveside service at Minneapolis cemetery will follow. The family would like to extend their deepest appreciation and thanks to the Nurses and Staff of Amorem (Caldwell) Hospice and Palliative Care and The Foley Center in Blowing Rock for the excellent care and concern everyone showed towards Jannie and her family. In lieu of flowers, donations may be sent to the Minneapolis Cemetery Fund or Minneapolis Baptist Church, 61 Minneapolis School Road, P.O. Box 38, Newland, NC 28657. Words of Comfort and Memories may be shared with the Carter family by visiting our website www.rsfh.net The care of Jannie and her family has been entrusted to Reins-Sturdivant Funeral Home of Newland.

Jannie Roberta Pritchard Carter, aged 97, passed from this life and into the arms of her Savior on Friday, August 13, 2021. Jannie is survived by sons, Lynn Carter (Susan) of Banner Elk, and Joel Carter (Kim) of Belmont, NC; grandchildren, Grant... View Obituary & Service Information

The family of Jannie Carter created this Life Tributes page to make it easy to share your memories.

Send flowers to the Carter family.