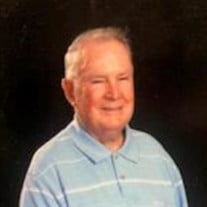 James Abraham “Abie” Robbins, 86, of Pineola, North Carolina, passed away at Water of Roan Highlands in Roan Mountain, TN on December 2, 2020. He was born March 25, 1934 at Garrett Memorial Hospital in Crossnore, NC to the late Edward P. Robbins and the late Veda Aldridge Robbins. He retired from the Charlotte Fire Department with 30 years of service. After retiring, he moved to Avery County in 1987. He enjoyed many retired years playing golf, fishing and hunting in the mountains he loved so much. He was a member of the Fellowship Presbyterian Church where he served as an Elder and in 2017 he received the honor of Elder Emeritus. In addition to his parents, he was preceded in death by a sister, Genevieve; brother, Truman; and a grandson, Knox Wagner Shelby. Abie is survived by his loving wife of 63 years, Hazel Woodruff Robbins; sons, Curtis and Ernie (Margaret); daughters, Marti Shelby and Lisal McDonald; twelve grandchildren and three great grandchildren. Brothers, Page (Claudia), Doran (Betty); sisters, Katy Fletcher, Edwina (Junior) Sluder and many wonderful nieces and nephews. A memorial service will be held on December 19, 2020 at 2:00 pm at the Fellowship Presbyterian Church, 1336 Walt Clark Rd, Crossnore, NC. Rev. Lonnie Barnes and Abie’s son-in-law, Steve Shelby, will officiate. In lieu of flowers, memorials may be made to the Bridgemont Camp and Retreat Center where he served on the board of directors for over 30 years. Bridgemont is a Christian camp for youth. Memorials may be sent to: Bridgemont c/o Fellowship Presbyterian Church, 1336 Walt Clark Rd, Newland, NC 28657. Condolences and memories may be shared at www.rsfh.net The care of Abie and his family has been entrusted to Reins-Sturdivant Funeral Home of Newland.

James Abraham &#8220;Abie&#8221; Robbins, 86, of Pineola, North Carolina, passed away at Water of Roan Highlands in Roan Mountain, TN on December 2, 2020. He was born March 25, 1934 at Garrett Memorial Hospital in Crossnore, NC to the late Edward... View Obituary & Service Information

The family of James Abraham Robbins created this Life Tributes page to make it easy to share your memories.

Send flowers to the Robbins family.