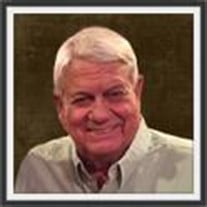 James Burleson, age 76, of Newland, North Carolina passed away on Sunday, August 23, 2020 at his residence in Newland. He was born on April 29, 1944 in Mitchell County, North Carolina, a son of the late Doby Burleson and the late Hazel Ledford Burleson. James graduated from Mars Hill College and retired from First Union Bank, where he served as the City Executive for the Newland Branch for over 25 years. He was a member and past deacon of First Baptist Church Newland, Vesper Masonic Lodge in Spruce Pine, Shriners and the Lions Club. He had served on the Board of Trustees for Mayland Community College, the Board of Directors for Mountain Glen Golf Club and the Avery County Tourism and Economic Development Board. In addition to his parents, he was preceded in death by a Sister, JoAnn Abernathy. James leaves behind to cherish his memory his: Wife of 54 years, Dianne Richardson Burleson of Newland, NC; Son, Stephen (Cheryl) Burleson of Newland, NC, Daughter, Sherry (Doug Tennant) Burleson of Linville, NC, Sister, Mary Goins of Merritt Island, FL, Sister, Bernice Peters of Spruce Pine, NC, Granddaughter, Victoria (Jeremy) Woods of Asheville, NC, Granddaughter, Abbie Burleson of Newland, NC, Great-Granddaughter, Eleanor Belle Woods; Brother in law, Tommy (Shirley) Richardson of Winston-Salem, NC; Sister in law, Glenna (Joe) Ollis of Marietta, GA; Brother in law, Roger (Carol) Richardson of Bakersville, NC; Host of nieces and nephews. James will be interred in the First Baptist Church Newland Cemetery. In lieu of flowers, memorials may be made to: First Baptist Church Newland, PO Box 165 Newland, NC 28657. Words of Comfort and Memories may be shared with the Burleson family by visiting our website www.rsfh.net The care of James and his family has been entrusted to Reins-Sturdivant Funeral Home of Newland. (828) 733-2121

James Burleson, age 76, of Newland, North Carolina passed away on Sunday, August 23, 2020 at his residence in Newland. He was born on April 29, 1944 in Mitchell County, North Carolina, a son of the late Doby Burleson and the late Hazel Ledford... View Obituary & Service Information

The family of James Burleson created this Life Tributes page to make it easy to share your memories.

Send flowers to the Burleson family.