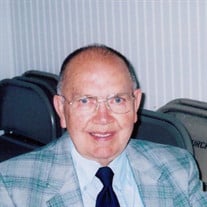 Jack Coffey, age 87, of Linville Falls, North Carolina passed away on Saturday, June 29, 2019 at the Life Care Center of Banner Elk, NC. He was born on September 4, 1931 in Avery County, North Carolina. He graduated from Newland High School in 1949 and received his Masters in Education from Appalachian State University. Jack served his country in the United States Army from 1957-1959. Jack received his Doctorate of Education at Highland University in Maryville, TN. He taught at Lees-McRae College for 29 years where he received the Algernon Sydney Sullivan Award in 1976 as well as the title "Professor Emeritus" in 1999. Jack was a trained Emergency Medical Technician and had received numerous awards and acknowledgements for his volunteer service with Avery County. He was trained as a Lay Pastor with the United Methodist Church and was a member of the Pisgah United Methodist Church. Jack was a friend to all and loved to serve Jesus and the community he lived in. He was preceded in death by his parents, Henry and Essie Townsend Coffey. Jack leaves behind to cherish his memory his: Wife of 62 years, Barbara Dennie Coffey of Linville Falls, NC; God-Son, Cameron Duckworth, God-Son, Casey Duckworth, Sister, Peggy Hamlin of Linville Falls, NC, Sister, Annis Sherwood of Port Deposit, MD; and Several Nieces and Nephews. Funeral Services for Jack Coffey will be held at 2:00 p.m. on Monday, July 1, 2019 at the Pisgah United Methodist Church with Rhonda Campbell and Terry Duckworth officiating. Interment will follow in the Pisgah Cemetery. The family will receive friends at the church on Monday beginning at 1:00 p.m. Pallbearers will be: Roy Lee Dennie, Cory Hoyes, Casey Duckworth, Tommy Duff, David Yeater, Cameron Duckworth and Logan Guinn. Honorary Pallbearers will be: Mark Stout, Danny Guinn, Jimmy Guinn, and Frank Guinn. The family would like to thank the staff and therapists at Life Care Center of Banner Elk and to their church family at Pisgah United Methodist. In lieu of flowers, donations can be made to Terry Duckworth Ministry, RAMS Rack or Pisgah United Methodist Church. Words of Comfort and Memories may be shared with the Coffey family by visiting our website www.rsfh.net The care of Jack and his family has been entrusted to Reins-Sturdivant Funeral Home of Newland. (828) 733-2121

The family of Jack Coffey created this Life Tributes page to make it easy to share your memories.

Send flowers to the Coffey family.