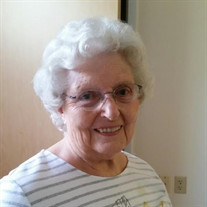 Helen Estelle Spaulding Smith joined her Lord and Savior on July 1, 2018 with family by her side at Rosehill Retirement Community, in Marion, NC. Helen was born on March 9, 1928 in Pittsburgh, Pennsylvania. She was the daughter of the late Eloise Isabelle Freeman and Howard Dean Spaulding. Her beloved husband, Robert Clement Smith, MD preceded her in death, dying 5 days short of their wedding anniversary. They were married almost 64 years. Helen met her future husband when they were both students at the University of Pittsburgh, attending Intervarsity Christian Fellowship. Helen conveniently left her Bible behind at a meeting, and Bob gallantly returned it, starting their romance. They were married while Bob was in medical school at Pitt. Afterwards, Bob was a flight surgeon in the United States Air Force, so Helen spent the first 7 years of marriage moving with the Air Force and for Bob’s residency. They lived in Spokane, Washington, San Antonio, Texas and Cleveland, Ohio before moving to Banner Elk in 1959, when Bob joined the staff of the then Grace Hospital. Bob and Helen remained in Banner Elk until 2016, when they moved to Rosehill. Helen and Bob also hosted a Bible Study at their home for over 20 years, drawing in many college students and others from the community. Helen also taught adult and children’s Sunday School, because she loved God and His word. Helen celebrated her 90th birthday in March, at Banner Elk Presbyterian Church, where she and Bob had been long-time members. Over the years, Helen, as a mother of 6, saw many needs in the community and worked to fill the gaps. She taught kindergarten before it was a part of the school system as well as swim and tennis lessons for her children and the area youth. She was also involved with the local Girl Scout troop. Helen had majored in Physical Education in college. She, like her mother before her, was a faithful prayer warrior, praying for her family and for those with whom she came in contact. Helen is remembered as a loving, kind, gentle person, full of patience. With a physician as a husband, she was largely responsible for the raising of her large family. Helen is survived by her six children: Paul Spaulding Smith (Serena) of Banner Elk; Mark Lynn Smith (Carolyn) of Altamont; Emma Jean Smith Nelson (David) of Germanton, NC; Rebecca Sue Smith Shuford (Edward) of Marion, NC; Steven Reuter Smith of Banner Elk; Ruth Ann Smith Gleason (Paul) of Crystal Lake, IL. Helen has twelve grandchildren: Douglas Smith (Margaret) of Birmingham, AL; Katharine Smith Spradling (Jason) of Baltimore, MD; Nathaniel Smith of Asheville, NC; Mary Chesnut Smith of San Francisco, CA; Lilly Nelson Snow (Miles) of Raleigh, NC; Rachael Nelson Spainhour (Chris) of Pilot Mountain, NC; Jacob Foxx (Althea) of Old Fort, NC; Chris Foxx of Marion, NC; Macie Shuford Vaughn (Travis), Fort Lewis, Washington; Will Shuford, Marion, NC; Beth Gleason Parks (Ben) of St. Louis, MO; and Laura Gleason Wruk (Tim) of Napierville, IL. Helen was blessed to have seven great-grandchildren: Amelia Spradling, Wesley Spradling, Benjamin Spainhour, Everett Spainhour, Isabelle Spainhour, Olivia Foxx and Phoebe Parks. Helen had two sisters: the late Lois Janusey, of McMurray, PA and Helen is survived by one sister, Betty Sue Gratz of Sewickley, PA. She is also survived by nieces and nephews. The family will have a private burial. Friends are invited to the memorial service which will be at Banner Elk Presbyterian Church on Saturday, July 7 at 2:00 PM with a reception following at the church. Instead of flowers, the family would appreciate contributions to The High Country Prison Ministry, P.O. Box 161, Crossnore, NC 28616 or to Banner Elk Presbyterian Church. Condolences and memories may be shared at www.rsfh.net The care of Helen and her family has been entrusted to Reins-Sturdivant Funeral Home.

Helen Estelle Spaulding Smith joined her Lord and Savior on July 1, 2018 with family by her side at Rosehill Retirement Community, in Marion, NC. Helen was born on March 9, 1928 in Pittsburgh, Pennsylvania. She was the daughter of the late... View Obituary & Service Information

The family of Helen Smith created this Life Tributes page to make it easy to share your memories.

Send flowers to the Smith family.