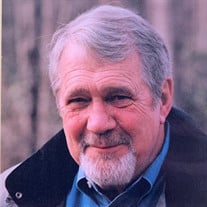 George Roland Mullinix, age 81, passed away on Sunday, August 4, 2019. He was born December 17, 1937 in Wake County, and moved to Burke County as a young child being the son of the late Rex Sr. and Goldie Smith Mullinix. He also was preceded in death by his brother Rex Mullinix Jr. Although he spent his youth in Burke County, he always called the mountains home. Roland graduated from Hildebran High School and then attend Lenior Rhyne College in Hickory graduating with a Bachelor’s Degree in History. In his late teens Roland felt a call to the ministry, so he went on to continue his education at Duke Divinity School, graduating with a Masters of Divinity. He later pursued a degree in Counselor Education and Research at Appalachian State University and graduated in 1980. Roland was ordained into the United Methodist Conference serving a wide variety of appointments through the Western North Carolinas United Methodist Conference. This included being a parish minister serving churches both large and small. He received special appointments as a resort outreach minister in Banner Elk and chaplain at High Point College. His last appointment before retirement was West Jefferson United Methodist Church. From there he served as a counselor at New River Mental Health in Ashe County and later worked as an inpatient social worker at Cannon Hospital in Banner Elk. As a man who served so many, he continued his work in Hickory at the Family Guidance Center, before returning to his beloved mountains to work with children in need at both Grandfather Home for Children and Crossnore School. Wherever he was located, Roland always got involved in the community sharing his many talents. He focused much of his volunteer effort in working with youth and the aging. Following his final retirement from the United Methodist Church, he served as bridge interim pastor and was on staff at Banner Elk Presbyterian Church in Banner Elk until his health began to fail. Being involved with the theater and music was a large part of his life as well. He was involved with Lees McRae Theater for many years as well as an outdoor drama in Valdese, “From This Day Forward”, and the numerous productions put on at The Rock School there in Valdese. He was cast in many leading roles. Roland will be fondly remembered by many as an avid Duke fan, especially football. He was proud of the fact that he played on a 6-man football team in high school and had the scars to prove it. He enjoyed attending football games throughout his adult life at all his alma maters. Roland’s sermons, prayers and life were a gift to those who heard him and knew him. He presented the scriptures in a way so that all could understand and relate by making them applicable to everyday life. He is survived by his 2 sons, Brett Mullinix (Brenda) of Nelson, GA, Jon Mullinix of Walkertown, one granddaughter, Molly Mullinix, also of Walkertown, 2 step grandchildren, Brittney Threewitt (Lance) and Michael Brown . A memorial service and internment is planned for Sat. Aug. 17th at Banner Elk Presbyterian Church at 11 a.m. with visitation and a life celebration to follow in the church fellowship hall including a lunch. The family would like to offer their thanks to the staff of Life Care Center in Banner Elk and to the Nurses and staff of Medi Home Hospice for the continued care and support they have shown to Roland and his family. In lieu of flowers, memorials may be given to Crossnore School and Avery County Humane Society. Memories and condolences may be shared at www.rsfh.net The care of Roland and his family has been entrusted to Reins-Sturdivant Funeral Home of Newland.

George Roland Mullinix, age 81, passed away on Sunday, August 4, 2019. He was born December 17, 1937 in Wake County, and moved to Burke County as a young child being the son of the late Rex Sr. and Goldie Smith Mullinix. He also was preceded... View Obituary & Service Information

The family of Rev. George Roland Mullinix created this Life Tributes page to make it easy to share your memories.

Send flowers to the Mullinix family.