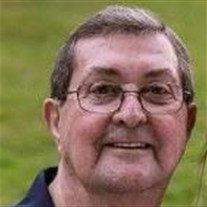 On the morning of October 14th, 2018 at 9:14 am, Wallace Gary Guinn husband of Vergie Mae Guinn, left this earth to be with his Lord and Savior. Born in Banner Elk, NC, he was the son of the late Warren Edward Guinn, Sr. and Zillia Ann Williams Guinn. In addition to his parents he was preceded in death by four brothers and seven sisters. Gary enlisted and served in the U.S. Air Force for two years and returned home to begin a life with his wife Vergie. Gary received his two year Associates of Business Degree from Mayland Community College and began a career being self employed in the auto business. He owned and operated Gary’s Auto Shop and Body Shop In Elk Park, NC and lived out his love for perfecting and making cars beautiful. The cars he most loved to restore was his favorite, the Classic Corvette. After retirement, Gary spent his free time restoring old cars and serving as a Mason in the Cranberry Masonic Lodge where he was certified as a Master Mason and a Grand lecturer. He spent many hours with fellow Masons helping them earn their degrees. His most cherished service in the Masonic Lodge was the assistance and service they provided to the Oxford Children’s Home. Gary was a member of Elk Park Christian Church. All who knew Gary, knew his determination and knew his love for his grandchildren. His health slowly began slipping away in the past year as the wedding of his first granddaughter was being planned for October 14th, 2018 in Charleston SC. He was determined to be there. With broken hearts, he remained behind with loved ones looking after him and promised to behave until we returned home with a wink and a reply, "Yeah Boy" Our daddy chose to leave this earth in the early morning hours on the day of Savannah and Chandler's wedding so that he could have a front row seat and be with his entire family for this beautiful day. Our hearts are broken as we miss him so much, yet at peace as we know he is with our father in heaven. He is now once again, "Fine and Dandy." Surviving is his wife of 52 faithful years, Vergie Mae Guinn of Elk Park, NC; daughters, Melanie Denise Guinn of Charlotte NC, Sarah Michelle Guinn Dellinger and husband Tommy Dellinger III of Crossnore NC; son, Gary Edward Guinn and wife Misty Guinn of Fletcher NC, Grandchildren, Thomas Dellinger IV and wife, Kiley Webb Dellinger of Crossnore, NC, Savannah Dellinger Bakken and Husband Chandler Bakken of Boone, NC, Reagan Dellinger, Grace Buchanan, Will Buchanan, Logan Buchanan, Bronson Guinn, and Keegan Guinn; Great grandchildren, Shirlyna, Stephanie, Joshua and Ronnie Dellinger. We thank everyone for your thoughts and prayers. A service to celebrate Gary's life will be held on Sunday, October 28, 2018 at 3:00 p.m. at the Elk Park Christian Church with Pastor Grant Foster and Pastor Jonathon Sheppard. The family will receive friends beginning at 2:00 pm on Sunday at the church up until the service hour. Words of Comfort and Memories may be shared with the Guinn family by visiting our website www.rsfh.net The care of Gary and his family has been entrusted to Reins-Sturdivant Funeral Home of Newland. (828) 733-2121

On the morning of October 14th, 2018 at 9:14 am, Wallace Gary Guinn husband of Vergie Mae Guinn, left this earth to be with his Lord and Savior. Born in Banner Elk, NC, he was the son of the late Warren Edward Guinn, Sr. and Zillia Ann Williams... View Obituary & Service Information

The family of Gary Guinn created this Life Tributes page to make it easy to share your memories.

Send flowers to the Guinn family.