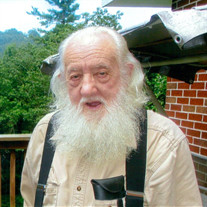 Fred J. Davis, Sr., age 87, of Newland, North Carolina passed away on Tuesday, April 9, 2019 at the Life Care Center of Banner Elk. He was born on October 19, 1931 in Avery County, North Carolina, a son of the late Avery J. Davis and the late Nellie Puckett Davis. Fred was a helpful and kind man who never met a stranger and would lend a hand to anyone. He served his country as a Med Tech in the US Army during the Korean War. He was a proud member of the Honor Guard for the Pat Ray Post of the VFW, of which he was a Life Member.Fred attended many churches in Avery County, and was always ready to jump in and teach a Sunday School Class if needed. He was well versed in the bible, which he studied daily. He enjoyed growing ramps and picking branch lettuce, hunting and fishing, and collecting rocks and four leaf clovers. Fred could amaze almost anyone looking for the clovers, he could just look to the ground and find one almost immediately. In addition to his parents, he was preceded in death by his siblings,Ellen, Pauline, Beatrice, EllaMae, NancyLou, Shirley Jean, Evelyn, and Avery, Jr. Fred leaves behind to cherish his memory his: Wife of 64 years, Ruby Vance Davis of Newland, NC; Son, Fred Davis, Jr. of Newland, NC, Son, Larry Dean (Carmen) Davis of Newland, NC, Daughter, Wanda Gail Johnson of Wilkesboro, NC, Seven Grandchildren, Fifteen Great Grandchildren, One Great Great Grandchild. Funeral services for Fred Davis will be held on Thursday, April 11, 2019 at 2:00 p.m. in the Grandfather Chapel of Reins-Sturdivant Funeral Home with Pastor Dave Atkins officiating. The family will receive friends beginning at 1:00 p.m. on Thursday at the funeral home. Interment with military honors will follow in the Church of Jesus Christ Cemetery. Fred's family would like to thank the staff of Life Care Center in Banner Elk and the staff of Medi Home Hospice. The family respectfully requests no flowers, and asks that in lieu of flowers, memorials be made to Medi Home Hospice PO Box 1357 Newland, NC 28657. Words of Comfort and Memories may be shared with the Davis family by visiting our website www.rsfh.net The care of Fred and his family has been entrusted to Reins-Sturdivant Funeral Home of Newland. (828) 733-2121

Fred J. Davis, Sr., age 87, of Newland, North Carolina passed away on Tuesday, April 9, 2019 at the Life Care Center of Banner Elk. He was born on October 19, 1931 in Avery County, North Carolina, a son of the late Avery J. Davis and the late... View Obituary & Service Information

The family of Fred Davis Sr. created this Life Tributes page to make it easy to share your memories.

Send flowers to the Davis family.