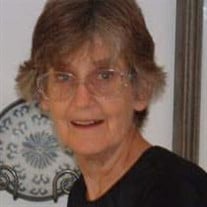 Evanell McKinney Perry was born on October 7, 1941 and died on August 16, 2019. Evanell was preceded in death by: her Parents: Charlie H. and Delestine Winters-McKinney, a Son Joseph Mark Perry, Sister-In-Law Wanda McKinney, Brother-In-Law R.C. Brown, Uncle Bobby Winters and a Nephew, Kevin McKinney. Left to cherish her memory are: her Husband of 57 years: Joe H. Perry, her Daughter: Leslie Perry-Burleson and Husband Jerry, her Sons: David Perry and wife Amy, Paul Perry and Wife Bernadette, her Grandchildren: Jake, Mark, and Jonathan Wise, Kendra and Marcus Perry, Malia and Kevin Perry, Seth Burleson and wife Heather, Jessi Burleson ; Great Granddaughter, Kylie Burleson, her Sister: Ruth McKinney-Brown, her Brothers: Walter McKinney and Wife Carolyn and Jeff McKinney and Wife Lou. Her Aunts: Leslie Hunnicutt and Doris Birchfield. She is also survived by a host of Cousins, Nieces, and Nephews. Evanell’s greatest mission in life was her 45 years nursing career. She worked for several years at Cannon Hospital, then for Dr. Robert Smith, Dr. Freddy Martin and Dr. David Kimmel. While working for Dr. Smith, she and a co-worker, Nola Mae Cook, started dressing up in costumes for Halloween. Evanell dressed as a witch, clown, bike rider or hobo, anything to amuse the patients, especially the elderly. They made sure to get an appointment near Halloween! One day, Dr. Smith was heard making a comment that “at least it wasn’t Halloween!” So, Evanell and Lola Mae dressed up like him! Their picture even made the local newspaper! While working with Dr. Freddy Martin, Evanell and their medical team made over 15 mission trips to Mexico. They took medical supplies, clothing, blankets, sleeping bags, etc. Evanell usually came back with an empty suitcase and only the clothes on her back! Later they were not allowed to cross the border with medicines. Evanell was also a gifted Wedding Cake Baker. She started out baking and decorating for friends and family, but soon had a big business. Our world has been blessed by having Evanell in our lives. Visitation for Evanell will be Tuesday, August 27, 2019 beginning at 1:00 PM at Valley Haven Baptist Church. Funeral Service will begin at 2:00 PM following the visitation with Pastor James W. Hughes Jr. and Rev. Don Stines officiating. Interment will follow in the Valley Haven Baptist Church Cemetery. In lieu of flowers the family would like donations made to Yellow Mountain Enterprises: 255 Estatoa Street, Newland, NC 28657 Words of Comfort and Memories may be shared with the Perry family by visiting our website www.rsfh.net The care of Evanell and her family has been entrusted to Reins-Sturdivant Funeral Home of Newland. (828) 733-2121

The family of Evanell McKinney Perry created this Life Tributes page to make it easy to share your memories.

Send flowers to the Perry family.