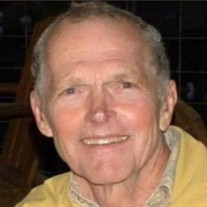 Colonel Edwin Carraway “E.C.” Newman II, an Air Force fighter pilot and test pilot, "slipped the surly bonds of earth" for the final time on April 7, 2021, at the age of 80 after a valiant fight with an aggressive form of multiple myeloma, attributed to Agent Orange exposure in Vietnam. E.C. was born in 1940 and raised in rural Sampson County, NC. In 1958, he graduated from Clinton High School, waved good-bye to the tobacco fields, and left the family farm for the U.S. Air Force Academy. In 1959, he played center in the first ever Air Force-Army football game, a 13-13 tie in Yankee Stadium. He graduated from the USAF Academy in 1962, the USAF Fighter Weapons School in 1969, the USAF Test Pilot School in 1974, and earned his master’s degree in Public Administration from Troy State University in 1984. He was the Top Gun of the 335th Tactical Fighter Squadron, the Weapons Officer of the 4th Fighter Wing at Seymour Johnson, and the Weapons & Tactics Officer of the 366th Fighter Wing at Da Nang. E.C. served in Korea during the Pueblo crisis and flew 227 combat missions and led 16-ship formations in air strikes over North Vietnam during the Vietnam War. He flew many different airplanes, ranging from the J-3 Cub to the 747 to the F-14, but his favorites were the F-4, the F-8 and the F-16. He won three Distinguished Flying Crosses and 14 air medals for extraordinary and distinctive achievements in aerial operations. The world of military aviation gave him tremendous joy. He retired from the Air Force in 1987 and from United Airlines in 2000, where he was a test pilot. He thought racquetball was the greatest game ever invented and played competitively. He also loved riding his Indian motorcycles and nurturing the woodland garden surrounding his mountain home in Banner Elk, NC. He worshipped God at Banner Elk Presbyterian Church and served the Avery County Senior Center and Feeding Avery Families. He was preceded in death by his oldest brother Marshall, and his wife, Lynn Parnell, to whom he was married for nearly 49 years. His greatest joys and most precious memories came from God and the family God gave him: his loving parents, Marshall Thomas and Isabell Butler Newman; his grandparents, Edwin and Emma Newman, and Addison and Novella Butler; his siblings, Marshall, Kitty, and Hilton; his children, Angela (Robert) Hrdlicka, St. Simon’s Island, GA, and Colonel (Ret./USAF) and Dr. Edwin (Betsy) Newman, Fayetteville, NC; and his beloved grandchildren, Thomas, Bennett, Bobby, Max and Shelby. E.C. believed that his time in this world was like a mere nanosecond in God's whole scheme of things, but he enjoyed his life on Earth, and felt very blessed. And thanks be to Jesus, the Great Adventure continues. The family will celebrate his life on April 16, 2021, 2pm, at Banner Elk Presbyterian Church, 420 College Drive, Banner Elk, NC 28604. In lieu of flowers, contributions would be appreciated to “Carolinas HealthCare Foundation” addressed to Levine Cancer Institute, Carolinas Myeloma Research Fund, c/o Dr. Saad Usmani, Carolinas HealthCare Foundation, 208 East Blvd., Charlotte, NC 28203. Expressions of sympathy may be sent to his children: Angela Hrdlicka, 612 Holly St., St. Simons Island, GA 31522, and Dr. Edwin Newman, 4140 Ferncreek Dr. Suite 801, Fayetteville, NC 28314. Words of Comfort and Memories may be shared with the Newman family by visiting our website www.rsfh.net The care of Edwinand his family has been entrusted to Reins-Sturdivant Funeral Home of Newland. (828) 733-2121

Colonel Edwin Carraway &#8220;E.C.&#8221; Newman II, an Air Force fighter pilot and test pilot, "slipped the surly bonds of earth" for the final time on April 7, 2021, at the age of 80 after a valiant fight with an aggressive form of multiple... View Obituary & Service Information

The family of Colonel Edwin "E.C." Carraway Newman created this Life Tributes page to make it easy to share your memories.

Send flowers to the Newman family.