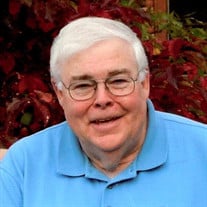 Edward Francis Welch was born on February 5, 1942 and was called home on February 20, 2020. Ed was born in Portsmouth, New Hampshire to Albert G. Welch and Dorothy Clark Kelly Welch. He was one of four siblings, predeceased by his older brother Clark Welch (Lacy) and survived by his younger brother Jay Welch (Dee) and younger sister Mary Grace Satur (Ron). At a young age, Ed’s family moved to Gainesville, Florida. Ed was a proud Eagle Scout. After his 1960 graduation from Gainesville High School, he enlisted and served honorably in the United States Army, before attending Florida State University in Tallahassee, Florida. At FSU, Ed was a member of Alpha Kappa Psi business fraternity and received his Bachelor of Science in hospitality management. Also while at FSU, Ed met the love of his life, Kathleen Patrice Hartnett Welch. Together, Ed and Kathy raised five children in Ormond Beach, Florida. Ed was in the hotel and restaurant industries for more than thirty years. After retiring from hospitality, Ed and Kathy worked together as co-managers at numerous retirement homes up and down the eastern United States. More important to Ed than any paid position he ever held, was his passion and commitment to help others. As a devoted Catholic at St. Bernadette Church in Linville, North Carolina, Ed spent years working with the poor and the hungry, counseling prisoners and mentoring those in need. If he wasn’t helping someone, Ed’s life was not being fulfilled. Ed was a man of honor and faith. He is survived by Kathy, his wife of fifty-two years, their five children, Mark, Kelly (Danny), Joseph, Matthew (Stacy) and Anne Marie, fourteen grandchildren, one great-grandchild and many nieces and nephews. A funeral mass will be held at St. Bernadette Church at 11:00 am, Tuesday, February 25, 2020. In lieu of flowers, please remember Ed through your donation to St. Bernadette Food Pantry, PO Box 1252, Linville, North Carolina 28646. Words of Comfort and Memories may be shared with the Welch family by visiting our website www.rsfh.net The care of Edward and his family has been entrusted to Reins-Sturdivant Funeral Home of Newland. (828) 733-2121

Edward Francis Welch was born on February 5, 1942 and was called home on February 20, 2020. Ed was born in Portsmouth, New Hampshire to Albert G. Welch and Dorothy Clark Kelly Welch. He was one of four siblings, predeceased by his older brother... View Obituary & Service Information

The family of Edward Francis Welch created this Life Tributes page to make it easy to share your memories.

Edward Francis Welch was born on February 5, 1942 and was called...

Send flowers to the Welch family.