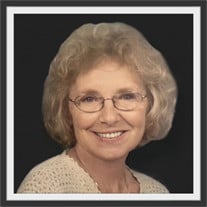 Doris Franklin Thompson of Linville Falls died Sunday, March 6th, 2022 at her home after a long illness. She was preceded in death by her husband, Dr. James Thompson Known as “Dodie” by her friends and family, she was the daughter of the late Albert and Emma Franklin. She was also preceded in death by a sister, Luci Jo Franklin McCoury Wright. She is survived by her three sons, Jamey (Bridgett), John Warren (Emma) , and Neil (Candi) and one “adopted son Frank VanDerBauwede of France; her beloved granddaughters Abby (Scott Gouge), Anna, Allie, Raegan and McKayla; Sisters Tense (Roger Banks) and Elizabeth Franklin; Brother Albert Dean Franklin, Jr. (Tonya); Nieces and nephews Aaron Banks (Parker, Emma, Nick), Jo Beth Banks, Samantha DeRosa (Josie), Susannah Dibble (Dillon, Dakota), Emily Gates (Franklin, Luci) Bert Franklin ( Katelyn, Kyler), Chris Franklin ( Sadie, Walter). Mrs. Thompson was a graduate of Crossnore High School, class of 1966. She spent several years with her husband Jimmy as he served in the U.S. Air Force and then completed a degree at the Medical College of Virginia Dental School. The couple then returned home to Linville Falls in 1977 where she helped establish Dr. Thompson’s dental practice and worked there for several years while raising her family. She then pursued her desire to become a nurse and obtained a degree from Mayland Community College in 1994. She worked for many years at Sloop and then at Cannon Memorial Hospital where she is remembered fondly and with respect by those with whom she worked as well as by patients for whom she cared. Active in her Church and community, Mrs. Thompson served for years on the Board of Directors of the Linville Falls Community Church, Pisgah Cemetery Committee, Franklin Reunion Committee and the Avery County Historical Board. She was a lover of flowers and worked to keep her garden beautiful as well as those in the Village. An avid sports fan, she never missed an event in which her children or grandchildren were participating. A Carolina basketball game or a Washington Redskins football game often found the Thompsons gathered in front of the television with Dodie front and center. She was renowned for her cooking and entertaining skills with many a rhubarb pie for church dinners or seafood crepes and double chocolate cheesecake to honor a bride-to-be. Visitation for Dodie will be Wednesday, March 9, 2022 from 5PM to 7PM at Reins-Sturdivant Funeral Home. Funeral Service will be Thursday, March 10, 2022 beginning at 2PM at Linville Falls Community Church. Burial will follow at the Pisgah Cemetery. Memorials to Mrs. Thompson may be sent to Building Fund for Linville Falls Community Church. Words of Comfort and Memories may be shared with the Thompson family by visiting our website www.rsfh.net The care of Doris and her family has been entrusted to Reins-Sturdivant Funeral Home of Newland. (828) 733-2121

Doris Franklin Thompson of Linville Falls died Sunday, March 6th, 2022 at her home after a long illness. She was preceded in death by her husband, Dr. James Thompson Known as &#8220;Dodie&#8221; by her friends and family, she was the daughter... View Obituary & Service Information

The family of Doris F Thompson created this Life Tributes page to make it easy to share your memories.

Send flowers to the Thompson family.