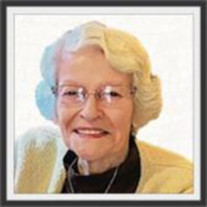 Donna Bousquet, 91, of Newland, North Carolina, passes away at home on April 8th, 2022. Donna was born in Worchester, Massachusetts on October 5th, 1930, the daughter of C. Dana and Lulu (Goodhue) Disney. She graduated from North High School and attended Kathleen Dell Airline Secretarial School in Brookline, Massachusetts. Donna married Donald Bousquet in 1952. After residing in Gastonia, they retired to the mountains of North Carolina in 1990. Donna was preceded in death by her husband Don Bousquet, son Chris Bousquet of Gray, Tennessee, and her sister Patricia Mountain of Worcester, Massachusetts. She is survived by her son Corey Bousquet, wife Deborah, of Pittsboro, North Carolina; grandson Jason Bousquet, wife Marcia, and great granddaughter Haley Ann of Gastonia, North Carolina; and her dear friend Katherine “Kitty” Webb. A memorial service will be held at 2:00 p.m. Monday, April 18th at Mountainside Lutheran Church, 1308 Linville Falls Hwy. 221/181, Linville, NC 28636, followed by a reception at the church. In lieu of flowers, donations may be made to the Mountainside Lutheran Church, P.O. Box 235, Linville, NC 28646 or to a charity of the donor’s choice. Words of Comfort and Memories may be shared with the Bousquet family by visiting our website www.rsfh.net The care of Donna and her family has been entrusted to Reins-Sturdivant Funeral Home of Newland. (828) 733-2121

The family of Donna Disney Bousquet created this Life Tributes page to make it easy to share your memories.

Donna Bousquet, 91, of Newland, North Carolina, passes away at...

Send flowers to the Bousquet family.