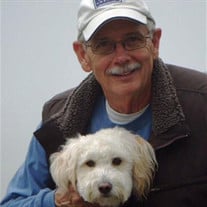 Clyde Eugene Keller was blessed to this earth on April 26, 1943, and returned home on July 19, 2018. The eldest of four children, he was born in Creston, Iowa to Robert and Dorothy Keller. He grew up with humble beginnings on a small farm in Diagonal, Iowa, with his three siblings - Ron, Les, and Diane. Clyde’s drive to be successful began in a one room schoolhouse and continued throughout the rest of his life. After high school graduation, Clyde joined the U. S. Air Force and served four years in Sioux City, Iowa. During his years of service, he was recognized for his expert marksmanship. After his service, he held several different jobs, but one in particular directed the course of his life: the one in which he learned how to make great pizza and to manage employees. His talents were recognized and he was presented an offer to be a partner in a restaurant franchise if he would move to the small town of Fayetteville, NC. After some persuasion, he agreed and, from there, successfully grew his franchise into multiple restaurant locations. Clyde was an avid lover of nature, choosing to spend most of his retired life outdoors whether it be going on hikes in national parks, sport fishing, golfing, and hunting. Sport fishing consumed many of his years later in life and he had many fish tales to tell! He loved being on the water and spending time at the beach as well as time in the mountains of North Carolina. Clyde’s smile could light up a room. Always upbeat, humor-loving, and quick-witted, he was quite the jokester with a contagious laugh. Admired as a man of personal strength and integrity, Clyde courageously stood up for his beliefs, principles and values. He was strongly patriotic and deeply loyal to his country. Clyde’s greatest love in life was his family, and he especially cherished time together with his beloved wife Nancy of 35 years, daughter, Brandy, grandson, David, and all his many nieces and nephews. Whether family or friends, Clyde cared for those he loved outstandingly. Clyde is survived by his loving wife, Nancy (Brang) Keller, daughter, Brandy (Keller) Ratley, grandson, David Lane Ratley, and sister Diane Pierce and husband Eric. He is preceded in death by his father, Robert Earl Keller, mother Dorothy (Pacha) Keller, and brothers, Ron Duane Keller, and Leslie Ray Keller. The Funeral Mass for Clyde Keller will be held on Friday, July 27, 2018 at 2:00 p.m. at the St. Bernadette Catholic Church, Linville, NC with Fr. Christopher Gober officiating. The family will receive friends on Thursday evening at the Reins-Sturdivant Funeral Home in Newland, NC from 4:00 p.m. until 6:00 p.m. In lieu of flowers, the family has asked that memorial donation be made to the American Alzheimer’s Association, in honor of Clyde’s mother. Condolences and memories may be shared with the family at www.rsfh.net The care of Clyde and his family has been entrusted to Reins-Sturdivant Funeral Home in Newland.

Clyde Eugene Keller was blessed to this earth on April 26, 1943, and returned home on July 19, 2018. The eldest of four children, he was born in Creston, Iowa to Robert and Dorothy Keller. He grew up with humble beginnings on a small farm... View Obituary & Service Information

The family of Clyde Eugene Keller created this Life Tributes page to make it easy to share your memories.

Send flowers to the Keller family.