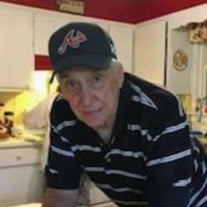 CLINTON IRA PHILLIPS December 23, 1935 - July 6, 2021 Clinton Ira Phillips, 85, passed away peacefully at his home on Tuesday, July 6, 2021 surrounded by the abiding love of his family. Struggling the last several years with declining health, Clinton’s resolve to live each day to the fullest was a blessing to his loved ones as was his determination to celebrate the traditional Phillips 4th of July with his wife, sons, grandchildren, great-grandchildren and the multitude of other family members who gathered each year in the field in front of his house. Clinton, son of the late Ethel Pritchard Phillips and Samuel Charles Phillips, was born in Avery County on December 23, 1935. In addition to his parents, he was predeceased by two sisters, Patsy Phillips Thompson and Carol Lou Phillips Yancey. Clinton is survived by his devoted and loving wife of 67 years, Sandra Kay Hughes Phillips and his four sons and their spouses: David Phillips and wife Donna, Danny Phillips and wife Kella, Tim Phillips and wife Marilynne, and Mark Phillips and wife Andrea. He cherished his 8 grandchildren; Tyne Franklin (Jeremy), Tyler Phillips (Brian), Dane Phillips (Paige), Jena Vance (Garren), Lauren Phillips, Samuel Phillips (Allison), Seth Phillips (Brittany), Ridge Phillips (Megan) and his four step-grandchildren: Sarah Stines (Tyler), Alyssa Carter, Madison Carter and Bailey Cole Allen. Of special delight to Clinton were his twelve great- grandchildren; Irelyn, Addison, Ayleigh, Jase, Tatum, Jude, Maddox, Lennox, Tripp, Tenley, Tate, and Banks. He was eagerly awaiting the soon to be arrival of his thirteenth great-grandchild, Teagan. Clinton is also survived by a host of brothers-in-law, sisters-in-law, nieces and nephews who loved him dearly. Clinton and Sandra spent the early years of their marriage in Charlotte, N. C. where they and their boys made many friends in the Thomasboro neighborhood and where Clinton worked for Youngblood Trucking Company. He became highly involved in the Enderly Park Little League Baseball Association and really enjoyed coaching the teams on which his sons played. In 1969 Clinton and Sandra decided to leave Charlotte and return to their beloved mountains in Avery County where they settled into their new home on Whitaker Branch and remained involved in their sons’ many activities. A special period of time in Clinton’s life were the eight years he spent as the Sheriff of Avery County where he made many friends all over North Carolina in law enforcement and felt honored to serve the people of Avery County in such a responsible position. In 2002 Clinton retired from the Avery County Public Schools. At an early age Clinton accepted Christ as his Lord and Savior when he was attending Crossnore Presbyterian Church. For many years, until the decline in his health, he regularly attended services at Pleasant Hill Baptist Church. An unassuming and humble man, Clinton was known for his kind heart, his positive, happy nature, his respect for others and his desire to see the best in everyone he met. He possessed a deep love for his family and enjoyed nothing better than cooking for his large family that would gather at his house each Sunday for lunch. He never turned down a friendly, competitive card game with his brothers-in-law and became a much loved member of the Viola and David Hughes family. Services will be held on Thursday, July 8th at 3:00 p.m. at Pleasant Hill Baptist Church in Frank. Visitation with the family will be prior to the service from 1:00-3:00 p.m. Interment in the Whitaker Branch Cemetery will follow the service. Dr. Bill Jones, pastor of Newland First Baptist Church will conduct the service assisted by Cameron Dula, pastor of Pleasant Hill Baptist Church Pallbearers will be grandsons; Tyler Phillips, Dane Phillips, Sam Phillips, Seth Phillips and Ridge Phillips and nephew; Curtis Thompson. Honorary Pallbearers will be D.J. Hughes, John Wayne Hughes, Pete Henley, Doran Robbins, Pat Hodges, Chris Pappas, Cory Hughes, Jeremy Franklin, and Garren Vance. In recognition of Clinton’s years of service as Sheriff, Enforcement Honors will be provided by the Avery County Sheriff’s Department. The family would like to thank their special friend, Dr. Alfred Earwood, for his many years of excellent, compassionate care for Clinton and to Caldwell Palliative and Hospice Care for their compassionate service during the past several days. The care of Clinton and his family has been entrusted to Reins-Sturdivant Funeral Home of Newland. Words of Comfort and Memories may be shared with the Phillips family by visiting our website www.rsfh.net

The family of Clinton Ira Phillips created this Life Tributes page to make it easy to share your memories.

Send flowers to the Phillips family.