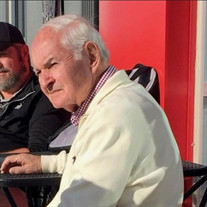 Charles Ayden Butler, Jr., age 83, of Morganton, NC, passed away on Saturday, January 30, 2021 at the Jonas Ridge Rest Home in Newland, NC. He was born on February 5, 1937 in Burke County to the late Charles Ayden Butler, Sr. and Lilian Warner Butler. In addition to his parents, he was also preceded in death by his wife, Barbara Reckling Butler, of Columbia, SC, who passed away on July 26, 2017. They were married on August 30, 1997 and lived in Cayce, SC. Charlie was a graduate of Lenoir-Rhyne University. His career was made in the furniture business, where he worked for Vaughan Bassett, Fairfield Chair, and Lee Industries. Those left to cherish his memory are his daughter, Caroline Butler of Morganton; his son, Hank Butler of Charlotte; his son, Ayden Butler of Morganton; sister, Eleanor Butler of Morganton; sister, Jane Butler Hill of Glen Alpine, NC; three grandsons, Hunter Butler of Chapel Hill, Stuart Butler of Charlotte, Jack Butler of Charlotte; and niece, Elizabeth Yancey of Glen Alpine. He is also preceded by his step children, Lee Langston of Columbia; Lawrence Langston and his wife, Kathy, of Buford, GA; and Layne Langston of Asheville, NC. He adored his step-grandchildren, Lora Leigh Langston of Columbia, and Dakota Langston of Asheville. When you met Charlie, it was apparent that he loved three things: history, politics and children. His talent for telling and remembering jokes kept his loved ones and acquaintances laughing with him through the years. He was a long-time supporter of the Democratic party, and had a special remembrance for John F. Kennedy, Jr. He loved talking about his grandchildren and carried their pictures with him wherever he went. His grandchildren all knew him as “Ta Ta.” Per Charlie’s wishes, the family will have a private ceremony at Folly Beach, SC at a later date. In lieu of flowers, the family kindly request that donations be made to: Good Shepard Fund at the Good Shephard Episcopal Church, 1512 Blanding Street, Columbia, SC 29201 Words of Comfort and Memories may be shared with the Butler family by visiting www.rsfh.net The care of Charlie and his family has been entrusted to Reins-Sturdivant Funeral Home of Newland. (828) 733-2121

The family of Charles Ayden Butler Jr. created this Life Tributes page to make it easy to share your memories.

Send flowers to the Butler family.