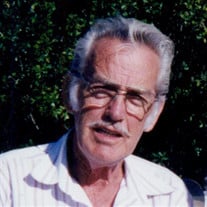 Mr. Bruce Johnson, 88, of Newland, NC, passed away on Thursday, October 3, 2019, surrounded by his sons, at 4:30am at the Watauga Medical Center in Boone, NC. He was preceded in death by his parents, Jeter Johnson and Louise Hughes Johnson of the Hughes Community; one daughter, Tami Elaine Johnson ; one brother, Bobby Johnson; and two sisters, Bernice Johnson Fowler and Nell Johnson Wetmore. Bruce is survived by his wife of 61 years Jean Ellis Johnson, of the home; four sons, Bruce (Mercy) Johnson, of Port Charlotte, FL; Greg Johnson, of Marlington, WV; Kenny (Tammy) Johnson, of Newland, NC; and Alan (Julie) Johnson, of Linville, NC; and one sister, Mary Lou Johnson Banner, of Linville, NC. Bruce leaves to cherish his memory, seven grandchildren; MaKenna, Kadynn, Kyleigh, Avery, Braydon, Hallie, and Luke; and numerous nieces and nephews. A veteran of the United States Army, he went on to hold many occupations, of which driving a truck became his primary job. His most memorable years of driving a truck was for Mike and Tom Aldridge. He also enjoyed playing bluegrass music on his fiddle and gardening. One of his fondest memories of playing music was performing with the legendary Bill Monroe. While logging the miles from coast to coast, he often entertained others playing the fiddle along the way. Bruce even passed his talents and skills to his children and grandchildren who love and follow in his musical footsteps. He was often seen working in his tomatoes and on his lawn mower. Bruce was reared in the Hughes Presbyterian Church, of the Hughes Community, and in later life, attended the Emmanuel Baptist Church, of Newland, NC. He leaves his friends and family with treasured memories and a faith that sustains them in the knowledge of his place with God. A private family service will follow at a later time. In lieu of flowers, memorials may be given Hospice & Palliative Care of the Blue Ridge, 236 Hospital Drive, Spruce Pine, NC, 28777. The Family wishes to express their sincerest appreciation to the many friends who visited him, and the nurses, doctors, and staff of Hospice for the kind and attentive care. Words of Comfort and Memories may be shared with the Johnson family by visiting our website www.rsfh.net The care of Bruce and his family has been entrusted to Reins-Sturdivant Funeral Home of Newland. (828) 733-2121

Mr. Bruce Johnson, 88, of Newland, NC, passed away on Thursday, October 3, 2019, surrounded by his sons, at 4:30am at the Watauga Medical Center in Boone, NC. He was preceded in death by his parents, Jeter Johnson and Louise Hughes Johnson... View Obituary & Service Information

The family of Bruce Johnson created this Life Tributes page to make it easy to share your memories.

Send flowers to the Johnson family.